Nothing brightens up a slow Monday morning like a colorful thank you note! ❤ 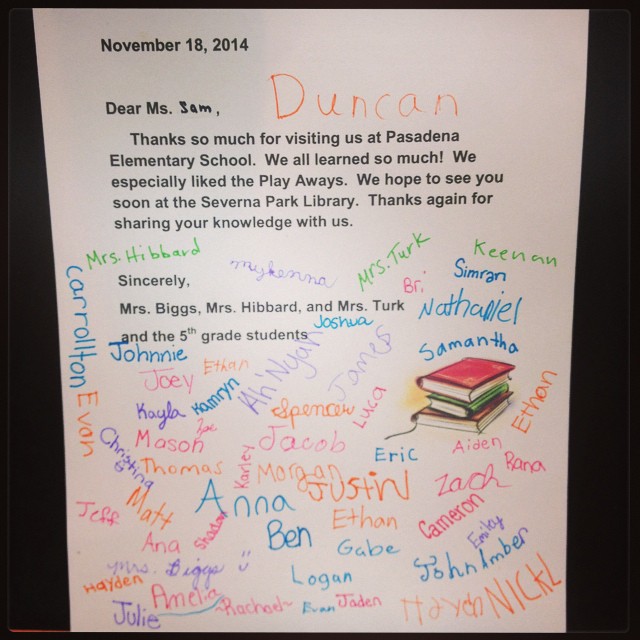 I have been making the rounds, trying to visit as many of the local 5th grade classrooms as I can to talk about the different resources the library has to offer.

Upper elementary school and early middle school is a tricky time for students. They are starting to get actual research projects but the books published on the subjects they are looking into tend to be too kidly or too mature. This is the time to introduce them to databases because the physical book resources are very limited.

Anyway, this is what I focus on when I visit the classrooms. I ask the teachers in advance about what projects are on the horizon and use that as my example search. Using an assignment they are currently working on keeps it relevant and will hold their interest versus just doing through the databases and having them imagine homework (because no one fantasizes about homework).

After you go over the basics of database searching, start moving into fun stuff. I’ve found the students are really intrigued by the learn a language databases, such as Muzzy. I also go over our other online services like live chat tutoring and chat reference.

Then it’s time for the fun stuff! eBooks! Downloadable Audiobooks! And Playaways! These really get their attention and this is where the questions will start coming in. You can use any of these items to also demonstrate a basic catalog search and explain the process of placing holds.

Try to make sure you have handouts for as many things as possible. They are only in fifth grade so not the best at note-taking just yet, so having how-to-find guides for them and their teachers take the stress off of them and you when it comes to remembering all the steps.

Above all, be energetic and have fun. The kids will respond to your energy and excitement. I had 55 kids in my last group and they were full of great questions. And as a bonus, two of them have already visited me at the library! And one of them brought the entire family to get library cards. Talk about results!

After a two week break from any kind of programming (our branch was an early voting location so our meeting rooms were not available and with the high numbers we get and the layout of our building, it’s not feasible to hold the program on the floor) I was back in zone today.

The first program was a little tricky. For a rainy Thursday morning, we had a nice sized crowd, about 20 kids, though the group definitely ran on the younger side. I started with a book I had never done before and I doubt I will ever do again with that young of a group (Farley Found It!) because the pictures didn’t really work from a distance. I also had several little ones just sort of wandering (well, it started out as one little one…then two…then after that the rest of them figured that must be okay and it devolved into a little bit of chaos).

ANYWAY the second program went much better. First, I switched out the first book and added a Jan Thomas book. And second, there was definitely a home daycare group so our numbers were much larger (42 kids) but the ages were more varied and we had a lot of older toddlers and preschoolers. When you have those older kids in the group, they model behavior for the little ones and so even though it was double the children, it was a much more controlled environment.

Bonus, I used my “Sherlock Dog” puppet that I have owned since I was the age of the children I read to! 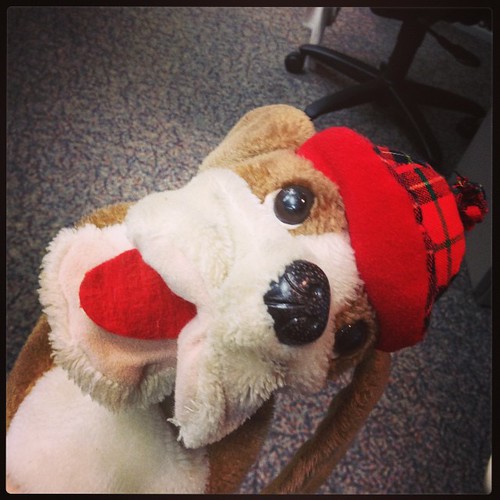 TODDLER TIME: D IS FOR DOG

Aside: Today we are focusing on print awareness and letter recognition, letting your toddler know that these different symbols on the page have meaning.

Aside: Pointing out words and letters can help your child make the connection between the words on the page and what you are saying.

Book: The Doghouse by Jan Thomas
[Jan Thomas books are great for print awareness because the text is always nice and big and bold]

Song: BINGO
[I made a simple felt board with the letters. I go over the letters with the children as I put them on the board. Between verses I ask them which letter I am removing and then we identify the remaining letters on the board]

Song/Fingerplay: Do your ears hang low?
[Do this about 3 times — once to teach them, once to practice and then the finale]
[found the actions in the book Marc Brown’s Playtime Rhymes. Even though I knew the song, I think it’s a good idea to point out that the library has books like this to remind new parents they are not expected to still remember all the nursery rhymes from their childhood.]

Book/Flannel: Dog’s Colorful Day by Emma Dodd
[Best flannel board ever! Have the kids identify the color of the new spot and then count the spots after a new one appears]

Goodbye Song: If You’re Happy and You Know It!
[I always use the action rhyme book Clap Your Hands by David Ellwand. One last chance to point at words to reinforce the print recognition. Here is an image of the flannel board I copied.]

Takeaway – Dog’s Colorful Day activity sheet.
[Point out the D is for Dog on the worksheet one more time for print recognition/awareness]