Today’s Toddler Time was a bit last minute as I agreed to help out to spare a co-worker who was coming down with something and had barely survived the Babies program the day before. But I had a few books I had been wanting to test run so even though the book had a hamster in it, the children were the real guinea pigs (see what I did there?)

I went with a vehicle theme which also turned out to naturally have a color theme built into it! For fun, I threw together a quick flannel board because nothing is easier (and kills time) than talking about a flannel board. 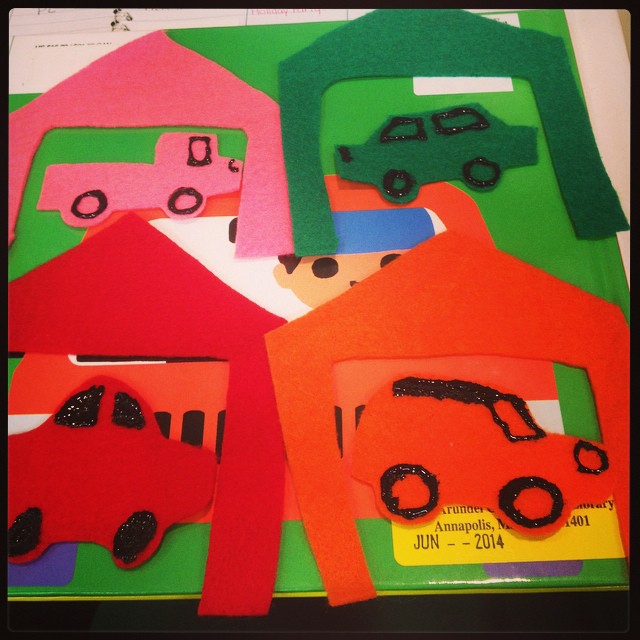 We identified the color of each garage as I placed them on the board, then we matched the cars to their appropriately colored garages (I made a joke about double parking because why not?) and then we counted how many cars we had. Then we sang them a song that I found on the same site I found the inspiration for the flannel board:

I also managed to dig deep into my memory and access the Car Car Song, which I used to sing with my brother when he was little. We learned it from the Kidsongs VHS but apparently that is a tweaked version of a Woody Guthrie song (my mom knew it as a Peter, Paul and Mary song). ANYWAY, it was a fun action song to get up and sing and help keep the wiggles at bay.

Here is the basic outline for the rest of the program:

Opening Song: Clap Along With Me/Open Shut Them

SONG: Take You Riding in my Car Car (have kid stand up and do actions)

My Car by Byron Barton (vocabulary word of the day – pedestrian)

Don’t Let the Pigeon Drive the Bus by Mo Willems (have kids say “NO!” to Pigeon)

FINALE: If You’re Happy and You Know It!

Take Away: Car coloring sheet with song lyrics on the back