I’m a fan of puppets. I grew up watching Sesame Street, Fraggle Rock, and The Muppet Show.

Oh who am I kidding, I STILL watch Sesame Street, Fraggle Rock and The Muppet Show!

So when my friend mentioned World Puppetry Day, I jumped at the idea of having a program at the library to talk about the different kids of puppets. 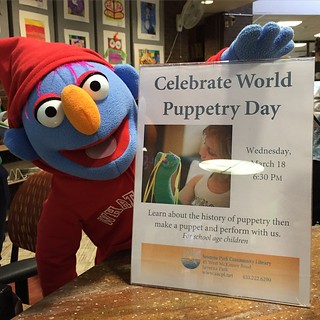 Our program attendees tend to run on the younger side, so even though we promoted the event for school aged children, we tried to make sure we had enough crafts to work for all ages.

We started off the program with a short talk about the history of puppets and went over from puppet related vocabulary, defining each kind of puppet. We described each puppet and asked the kids if they could guess the name of the puppet based on the description (This puppet uses a rod to control it’s arm, what would you call it? A rod puppet! Correct!). We showed them examples of store bought puppets and then also an example of a simple puppet you could make at home.

After that, I played a few clips of famous puppets and puppeteers. I made a quick YouTube playlist with some favorite clips and asked the kids what kind of puppet was being used (I didn’t play any of the clips in their entirety).

Then it was craft and play time! We brought a few puppets down from our Storytime collection and set them up on a table with a sheet, creating a makeshift stage area. We had print outs of knock knock jokes and the kids used them as scripts as they played with the puppets (at least, initially, then they went off into their own little games).

For puppet crafts, we had three different activities ranging in difficulty. If you can get your hands on the awesome book 10-Minute Puppets by Noel MacNeal, it is a great resource with lots of printables and inspiration for a program like this.

For the older children, we had the parts for the Elephant Rod Puppet already cut out and with holes punched sitting on a table. We used a thick cardstock for this. You will also need some straws, tape, and the gromits for the moveable parts.

On another table, we had butterfly shadow puppets. We made lots of butterflies, cut out from many different colored construction paper. Scissors and hole punches were on the table so the kids could create holes in the butterfly and then some colored plastic sheets that they could use to cover the holes. They taped a straw to the back and created their little works of art! 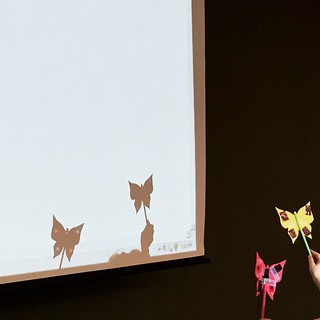 The last table had a craft for very little ones, a frog finger puppet that could be colored in. Two hole were cut into the bottom for “legs” created by the child’s fingers.

We set up the branch projector so the kids could test out their shadow puppets. They loved seeing the shadows on the wall (though don’t ask me why I went with Notepad instead of a blank PowerPoint slide…next time!)

While we only had 9 children show up they were VERY enthusiastic. They did all of the crafts, played with the puppets we brought down and talked to us about the puppets afterwards. One little boy wanted to create his own puppet (he wasn’t into the butterflies) and we gave him some plain white paper. He proceeded to draw a character from the Sonic the Hedgehog series and then he poked holes in him and used the colored plastic to create his own unique shadow puppet!

We’re already discussing next year. Of course, after we started to advertise the program we were approached by two different people asking about helping out with it. We are hoping they are still interested next year because we really didn’t have time to incorporate them into the event this time around. But we hope this can be an annual event, maybe even more elaborate each year with crafts and activities for older children and teens. 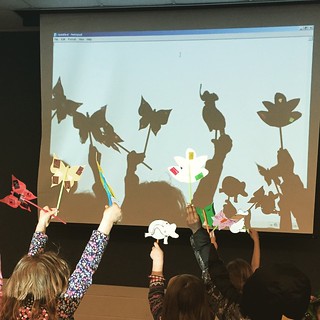